CNN) Earlier this year, astronomers were surprised to spot "unprecedented" changes in the supermassive black hole at the center of our galaxy. Now, they may have a better understanding of what they witnessed: the black hole enjoying an interstellar feast of gas and dust.
Astronomers were using the European Southern Observatory's Very Large Telescope in Chile and the W.M. Keck Observatory in Hawaii to observe the supermassive black hole at the center of the Milky Way in April and May.
It's 26,000 light-years from Earth, but it's the closest black hole we can see, even if it's largely obscured by dust.
This black hole, known as Sgr A*, has shown variability before. It's been observed for years in multiple wavelengths of light. But on three of the evenings they observed it [Aug 8-10 2019], it was unusually bright. 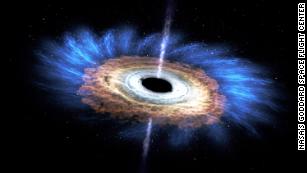 The unusually bright flux levels and variability showed peaks that exceeded twice the historical measurements of the black hole. What the astronomers were seeing was an eruption of the black hole unleashing bright radiation.
In addition to these bright levels, on two nights in May they also saw large drops in brightness occur over the course of minutes.
Some of the astronomers involved in the study, including Tuan Do at the University of California, Los Angeles who initially drew attention to the outburst by tweeting about it, have been observing the black hole for years. They've analyzed 13,000 observations from 133 nights since 2003.

"The first image I saw that night, the black hole was so bright I initially mistook it for the star S0-2, because I had never seen Sagittarius A* that bright," said Tuan Do, lead author of the latest research on the black hole. "But it quickly became clear the source had to be the black hole, which was really exciting."
The study has been published in the journal Astrophysical Journal Letters.
"We have never seen anything like this in the 24 years we have studied the supermassive black hole," said Andrea Ghez, UCLA professor of physics and astronomy and co-senior study author. "It's usually a pretty quiet, wimpy black hole on a diet. We don't know what is driving this big feast."

So what's causing the brightness? The gas and dust being devoured by the black hole are throwing off radiation. Now, the astronomers want to know if this is a single event or something leading up to more activity.
"The big question is whether the black hole is entering a new phase -- for example if the spigot has been turned up and the rate of gas falling down the black hole 'drain' has increased for an extended period -- or whether we have just seen the fireworks from a few unusual blobs of gas falling in," said Mark Morris, UCLA professor of physics and astronomy and co-senior study author.
The astronomers have several thoughts about what led to the increased activity. In 2018, the star S0-2 made a close approach to the black hole, releasing gas that reached it this year. It could also be the death of large asteroids as they're swallowed by the black hole. Or it could include G2, a strange object that could be a pair of binary stars, which closely approached the black hole in 2014.
It's possible that the black hole stripped off the entire outer layer, Ghez said.
And there's nothing to fear from the radiation, given the distance and the amount. It would have to be 10 billion times brighter to affect us, Do said.
For now, researchers are learning as much as they can from this event.
"We want to know how black holes grow and affect the evolution of galaxies and the universe," Ghez said. "We want to know why the supermassive hole gets brighter and how it gets brighter."
Hungry black holes
Our galaxy isn't the only hotspot for supermassive black holes acting like Pac-Man.
At the heart of a galaxy called GSN 069, which is 250 million light-years from Earth, astronomers have detected repeating X-ray bursts that happen every nine hours. The supermassive black hole at the center of this gallery is consuming enough material to comprise four of our moons at least three times a day.
That's a million billion billion pounds per meal.
"This black hole is on a meal plan like we've never seen before," said Giovanni Miniutti, study author of a new paper in Nature at the European Space Agency's Center for Astrobiology in Spain. "This behavior is so unprecedented that we had to coin a new expression to describe it: "X-ray quasi-periodic eruptions."
Observations by NASA's Chandra X-ray Observatory and the European Space Agency's XMM-Newton helped astronomers track the repeating outbursts and see when the black hole was speeding up and slowing down. During the events, the X-ray emissions would be 20 times brighter and the temperature of the gas flowing in would spike from 1 million degrees Fahrenheit to 2.5 million degrees.
Researchers want to gather more data on the repeating outbursts to learn more about them. As for the material the black hole is eating, it could be a star slowly being ripped apart.

Every time a bell rings

For the first time, astronomers have detected tones like the ring of a bell from a newly formed black hole.
Albert Einstein predicted that when black holes collide and form a bigger one, they would send out ripples in space and time called gravitational waves. And those waves would carry a specific tone much like a bell that's been struck.

But the researchers unexpectedly detected two tones, rather than one. Their finding was published this week in the journal Physical Review Letters.

"Before, it was as if you were trying to match the sound of a chord from a guitar using only a single string," said Matthew Giesler, study author and graduate student at the California Institute of Technology.
When black holes merge, it's a violent process. All of that energy has to go somewhere, so it's shed through gravitational waves.
A reanalysis of data captured by the LIGO detector, which helped detect gravitational waves for the first time in 2015, revealed the overtones.
"This was a very surprising result. The conventional wisdom was that by the time the remnant black hole had settled down so that any tones could be detected, the overtones would have decayed away almost completely," said Saul Teukolsky, study co-author and Robinson Professor of Theoretical Astrophysics at Caltech. "Instead, it turns out that the overtones are detectable before the main tone becomes visible."
REF/ https://edition.cnn.com/2019/09/12/world/black-hole-hungry-ring-scn-trnd/index.html